A Bus, A Treadmill and Masterpiece Work 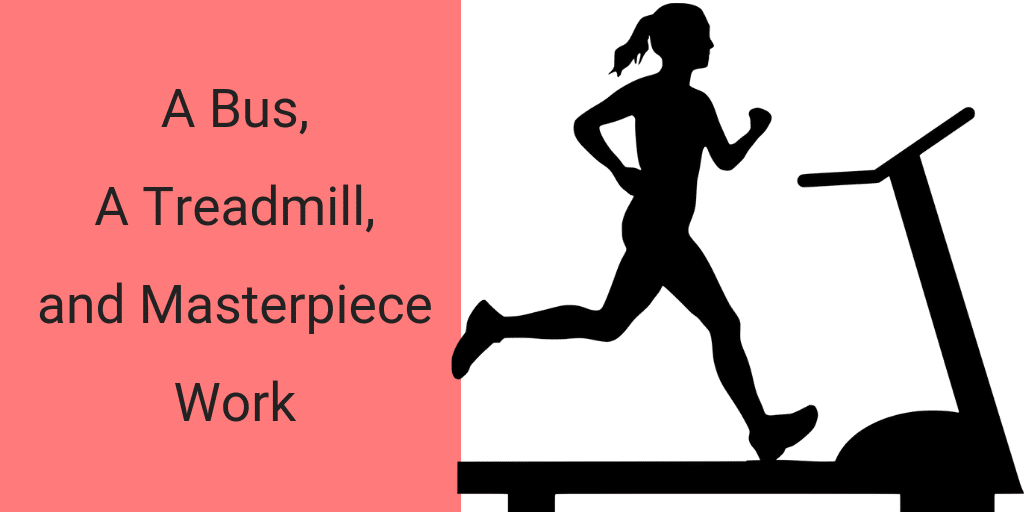 What do a bus, a treadmill and masterpiece work have in common? Sounds like a silly riddle, right? Keep reading for the important connection!

Recently I was talking to a group of high-achieving women who are diligently seeking what’s next in their lives. I shared my path, guiding frustrated high-achievers into their masterpiece work and casually asked the question, “Whose bus are you on?” Wow! I was overwhelmed with the powerful response I got to that little throw away question…. or what I thought was a throw away question.

I learned it’s not a throw away question in the lives of those who are stuck on the treadmill of “good enough”; feeling overwhelmed, settling for less and not finding the clarity they seek. It’s a very real question that deserves consideration.

Whose Bus? What Destination?

Awareness of whose bus you’re on tells you your destination, the direction you’re going, and the speed at which you’ll arrive. All of these are important considerations if you want to end up at the place YOU were created to be, doing the Masterpiece work YOU were created to do.

Do you know the answers to these questions?

When you decide to take a trip, how do you decide where you’re going and the route to get there? For instance, if you want to go west, that could be many places. Since I live in Columbus, Ohio, west can mean Indianapolis, St. Louis, Chicago, Denver, Phoenix, Seattle, San Francisco, Los Angeles, or San Diego….and a multitude of points in-between. West is not a specific enough answer to design a route or a plan to arrive at my destination…. unless any old destination will do. But generally, when we plan a trip, we want to go somewhere specific, not just any old destination.

Awareness Leads to the Right Destination

So, it is with our life, both at work and at home. When we deepen our awareness of where we want to go, we have a better chance of arriving at that destination.

The Benefits of Being on the Right Bus

A friend of mine spent over two decades in the financial services industry. She worked in sales for a couple different financial services firms, having started in the business as a part time position while her children were small. Twenty plus years later, she was still working in this industry, even though her life had changed in many ways and she had a very clear call to serve grandparents creating a legacy for their families.

She eventually realized she was afraid of stepping off of someone else’s bus and onto the bus that would lead her to the vision God had given her.  Claiming her Masterpiece work meant changing buses, declaring a destination and planning the route to get there. It meant taking responsibility for where she was going and being in charge of getting to her destination.

I’m watching her make that shift. She’s really stepping into the role of bus driver, owning the fact that she gets to decide the route and the speed to arrive at her destination. This woman is a baby boomer.  She spent years that she could have been doing her Masterpiece work playing small on someone else’s bus.  She is no longer in that place of playing small. She’s off the treadmill of good enough and settling for less. She’s owning the clarity she’s been given and she’s flourishing in the journey. It’s delightful to watch her move forward.

Knowing whose bus you’re on, whose bus you need to be on and the destination where you’ll find your Masterpiece work is a process that requires intentionality. You may be the driver or you may have a seat on a bus where someone else is the driver, but being on the right bus is critical. I invite you to get off the treadmill, determine if you’re on the right bus, and start planning your journey at the Activate Your Masterpiece Workshop on September 30.

We have only thirty spots, so don’t wait until the last minute to register. Today is the day to make the decision to do your Masterpiece work, to find that place where you can flourish, confidently saying “I’m on the right bus to get to my destination.”