Real Life Answers to “What Zone Are You In?” 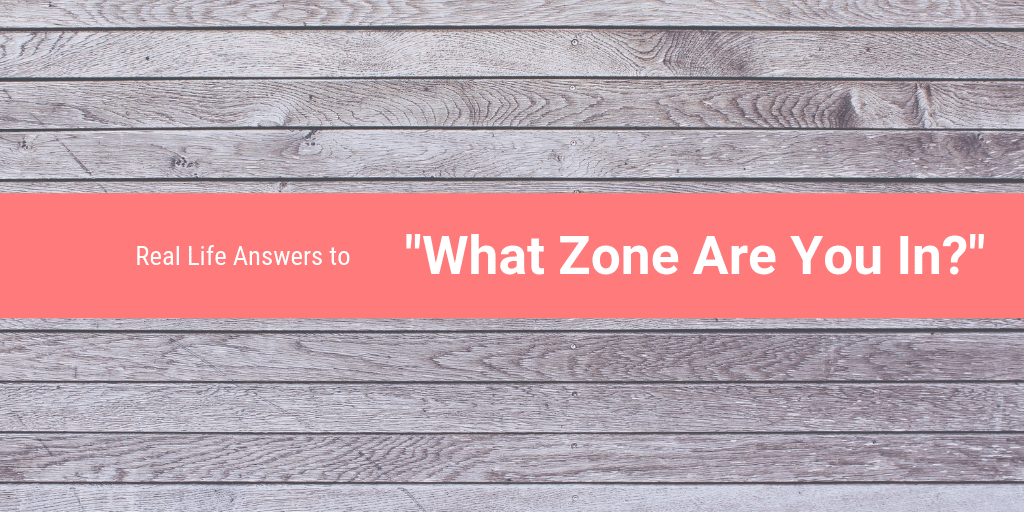 One thing I love about writing this blog is the response I get from those who read what I’m writing. Over the past month, I’ve made some changes that make responding to the post easier – and people have taken the opportunity to answer the question I’ve posed.

I’m thrilled to hear back from you, my readers. I’m not just writing and throwing it out there; it’s becoming a conversation. That’s my goal and my style.

Based on the conversation, I’m sharing the answers to my question two weeks ago, “What Zone Are You In?” It was eye opening to hear the responses from different people – some I know well and some I’ve never met.

Choosing to go from Zone 4 to Zone 1

Jerry says he was in Zone 4, and now he’s in Zone 1. I chuckled when I read his response, because Jerry was a work colleague in a former life. He approved work I wrote before it was distributed – he was a corporate attorney and I’m sure I drove him crazy more than once. When I read his Zone 4 to Zone 1, I interpreted it as he was a very good food labeling regulatory attorney, but now he’s retired and has to learn the role of retired person. I reached out to make sure that was true. He said no, what he referred to in Zone 4 to Zone 1 is the food labeling regulations have changed again and he decided this time he wasn’t willing to put in what it takes to become an expert in food regulatory law again. Jerry, you’ve earned the right to say no to learning this all over again…. for the third time.

Duncan commented that he is in Zone 2. That made me think about why someone might be content in Zone 2. I suspect some of our readers are in this space.

My Dad spent much of his life in Zone 2 and Zone 3 in his “paycheck job”. He worked two jobs for many years – as a commercial construction foreman and as a grain farmer. His construction job was a Zone 2/3 space for him, but he did it to bring in the money needed for our family. That money also supported the mortgage to purchase the land he farmed, which was his Zone 4 space.

Content in Zone 2 or 3 in One Area of Life, Zone of Genius in Another

Farming was Dad's passion. It was the lifestyle and values he wanted to pass on to his children. Farming allowed him to contribute to feeding a hungry world. He was an early adopter of new farming techniques and technology.

At the funeral home after Dad died, one of his suppliers shared with me that if they had a new technique for farming, Dad was one of the first people he asked to try it out. Dad would consider it and often try the new technique or process. Being in Zone 4 doesn’t always mean being an early adopter, but it definitely means being in the space where you are making your biggest contribution to the world. I believe my passion for guiding leaders into their Masterpiece Work comes partly from my dad’s example.

Noreen shared, “I think I am in work that is in my Zone of Excellence, but I yearn for the place of Masterpiece Work. I am trying to make decisions (slowly it seems).”

Noreen, stay the course. Masterpiece Work doesn’t happen overnight. It takes time and intentionality to get there. That being said, clarity comes with action. Stay tuned over the next few weeks, as I’m offering the Activate Your Masterpiece mastermind this summer. It’s filled with actions that lead to clarity!

One Foot in Zone of Excellence, the Other in The Genius Zone

Finally, Andee says, “I'm in the Zone of Excellence, and a wee bit stuck there for the time being. But I'm blessed to have a foot in what I think may be my Genius Zone!”

Truth be told, I know Andee’s story. She’s been in her current position for a while now – working in this area in two different organizations. When she started in her current role, it wasn’t her Zone of Excellence, but held seeds of her Zone of Genius. Over time, her season has changed and it’s time for her to move from this Zone of Excellence into her new Zone of Genius.

The new role in her Zone of Genius is clearly her Masterpiece Work, where God has created her anew for larger impact on the world.

Changing Seasons Lead to New Understanding of Zone of Genius

Next week we’ll explore the four hidden barriers that underlie your Upper Limit Problem. When you expose and dis-solve these barriers, you’re free to step more fully into your Zone of Genius.

What do you think? Do you prefer a conversation to a lecture or one way communication? Does hearing the experiences of others help you understand concepts and your own experiences more clearly? Let me know in the comments.