3 Clues That It’s Time to Move On 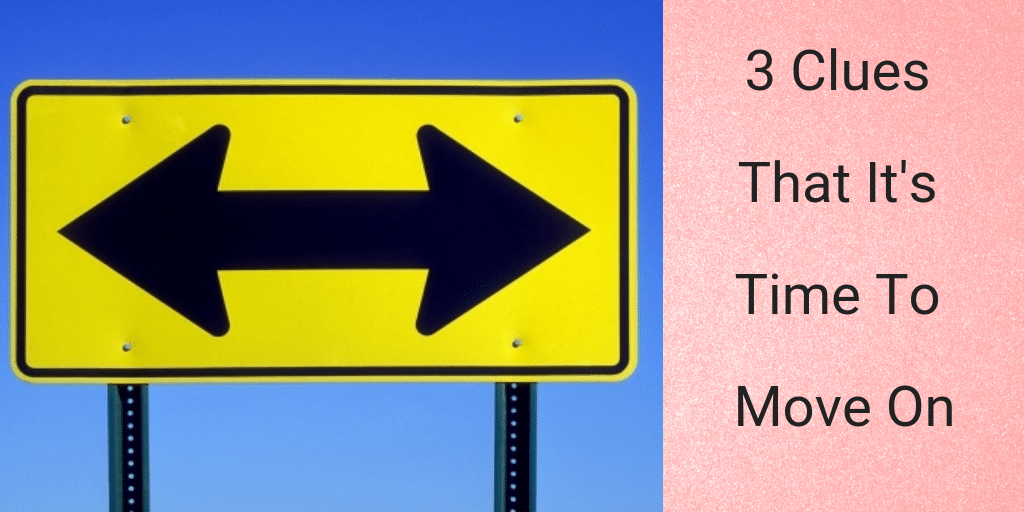 It was becoming more and more apparent. Things were just not as smooth and easy and they’d once been. One by one, others were leaving the group I’d leaned on. And I was finding a new group much more productive, stimulating, and aligned with who I am and my Masterpiece Work.

I could see the need to change. Obviously, the season was changing. I dreaded the ending. I knew it wouldn’t be easy. But I didn’t expect the abruptness of the end. I never expected to come to this place, to hit the wall with such force. Sometimes things just happen and you have to respond. And the ending is done in a way you didn’t expect or plan for.

You may have experienced this with a lay off in your job (I have), a break up (I have), a client who leaves, or a friend who is no longer interested in connecting. We all do at some point.

In each of these situations, we can struggle to make sense of it. As we gain distance from the initial shock of the ending, we gain perspective. In retrospect, we see that what is now gone may have been holding us back from needed growth. It may have been a barrier to action we needed to take. It may have interfered with the singular focus we needed to grow into the next level of our Masterpiece Work.

My question for you today is:

What needs to end to make way for your Masterpiece Work?

Reflecting on my experience, there were clues that the season was ending.

Each of these clues presents itself in a different way. The mismatched values were the most apparent. They became a key sticking point. Knowing your own values, as well as your business style, will help you discern your alignment and when it's time for a season to end.

Knowing a season is ending and leaving well may be two different things. Our culture isn’t good at endings. We tend to do beginnings well and endings are done poorly – there is now a word for poorly done endings – ghosting.

The opposite of ghosting is hanging on, staying in a work role, group, or learning situation.

So why do we do this? Why do we avoid the necessary ending? Here are several possibilities:

Any of these reasons will keep us stuck. Each one can be a barrier keeping us from our Masterpiece Work. Becoming aware of clues and courageously stepping into a necessary ending will free up the bandwidth you need to step into your Masterpiece Work.

What needs to end to make space for your Masterpiece Work?

P.S. As this year draws to a close, you may be considering a change for 2019. If you're considering making space, I have three spaces for 1 to 1 VIP Coaching open right now. Get a jump on next year by investing in yourself. You’ll also reap the benefit of starting in 2018. Coaching rates go up on January 1. Start Now! You’ll thank yourself on January 1!